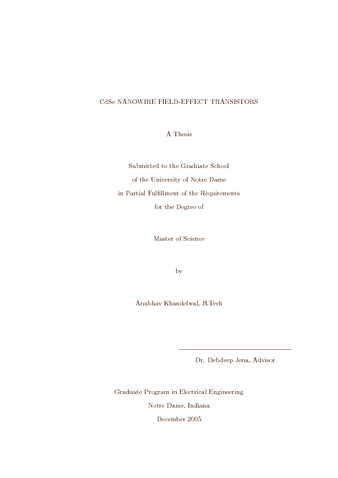 We report the fabrication and characterization of single and network of CdSe nanowire (NW) field-effect transistors (FETs). The NWs are grown by the Solution-Liquid-Solid (SLS) technique and are on an average 10 nms in diameter and few microns in length.

Back gating is employed to fabricate FETs. Electrical contacts are defined to network of NWs by photolithography while E-beam lithography (EBL) and Focussed Ion Beam (FIB) methods are employed to contact single NWs that act as channels of the FETs. Fabrication of NW FETs, with problems encountered and possible solutions to the problems are discussed in detail.

Field effect characterization indicates n-type unintentional doping of CdSe NWs. In dark, turn-on to turn-off current ratios between 10 and $~$10$^{3}$ for single NWs and between 10$^{3}$ and 10$^{6}$ for network of NWs FETs have been realized.

Our NW FETs show high photoconductivity which makes them suitable for NW based optical sensing.