Jumièges Abbey: Remains of the nave of St. Pierre 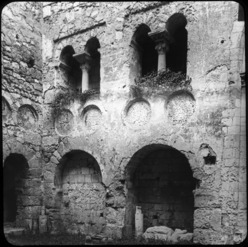 The nave (width 8.5 m), with unarticulated walls, consists of arcades with plain arches springing from rectangular piers with imposts; above is a row of blind oculi (no doubt originally decorated with painting or inlay), then a narrow circulation gallery returning into the western tribune and open to the nave through paired arches. (Grove)

Founded in 654 by Saint Philibert, Jumièges Abbey was ruined in the Norman invasions from 841. In 942 William I, Duke of Normandy, brought 12 monks from Poitiers to refound it. The church of St. Pierre was rebuilt towards the end of the 10th century. Thierry, Abbot of Jumièges, envisaged the reconstruction of the great Carolingian abbey church of Notre-Dame and probably began the work but died (1027) before he was able to finish the project. Notre-Dame was built between 1040 and 1067 and was consecrated by Maurille, Archbishop of Rouen, in the presence of William the Conqueror. The Romanesque chapter house, with one straight rib-vaulted bay terminating in an apse, was built ca. 1110 and vaulted ca. 1130. During the second half of the 13th century, the choir of Notre-Dame was rebuilt and then that of St Pierre. In 1511 Antoine du Bec Crespin had a dormitory constructed to the south of St Pierre. The Maurist reform intervened in 1617. During the second half of the 17th century François II de Harlay built the abbot’s lodgings and the library. A large dormitory parallel to St Pierre was built in the 18th century. After the dispersal of the community (1791), the abbey, sold as property of the State, was used until 1824 as a stone quarry and ruined. It was restored from 1852 by the Lepel Cointet family and has been classified as a historic monument.