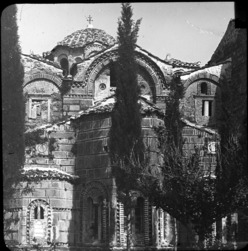 The church (also known as the Metropolis) stands at the north-eastern edge of the Lower Town and was originally built as a basilica with three aisles by Metropolitan Eugenios (1263-1272), who is probably portrayed in the apse. Metropolitan Nikephoros Moschopoulos (1286-1315) added the narthex, and during the 15th century another Metropolitan, Matthew, tried to adapt the basilica to the plan of the churches of the Hodegetria (or Aphentiko) and the Pantanassa by adding an upper storey in the shape of a cross-in-square church with five domes. A dedicatory inscription referring to the second phase of the building, and containing the date 1291-1292, is preserved in the church. The painted decoration of the church was completed in two consecutive phases.