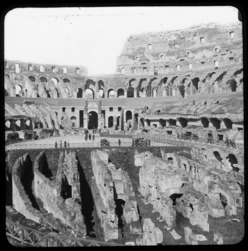 The arena floor, which covered the usual complex of underground chambers, was of wood and so has disappeared.

In the greatest amphitheatre (188x156 m), the Colosseum (begun ad 75), the seating was entirely supported by a complex series of annular and radial corridors on three levels, many of which contained staircases. The building’s travertine façade is 48.5 m high and contains 80 arched entrances at ground-level, flanked by Doric half-columns and numbered for ticket holders. The middle and upper tiers of arches are flanked by Ionic and Corinthian half-columns respectively, and a fourth storey has alternating square windows and large bronze shields flanked by pilasters. Near the cornice are the brackets that supported the masts for the awning ropes, while at ground-level outside are several of the bollards that secured them. In the middle of the north and south ends of the amphitheatre are elaborate triple entrances, for the emperor and for the consuls and magistrates respectively. Apart from a wooden top gallery, the seating was of stone, and the building’s capacity is estimated to between 45,000 and 73,000 spectators. The arena (86x54 m) was surrounded by a high podium wall and a high safety net on wooden poles to protect the spectators. The arena floor, which covered the usual complex of underground chambers, was of wood and so has disappeared.