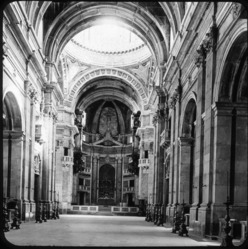 After the earthquake of 1755, Oliveira became part of the team involved in the reconstruction of Lisbon. Built by order of Queen Mary I of Portugal, as a fulfilled promise for giving birth to a son (José, Prince of Brazil). The huge church has a giant dome. Two designs for the façade are known, one with towers and the other without, both surmounted by a countercurved pediment and generously provided with windows. Sober but resolutely Late Baroque, the building was inspired by Mafra, also a great votive basilica. Oliveira died when the construction of the church had reached the cymatium, and the work was completed by Reinaldo Manuel dos Santos. The interior contains several paintings by Pompeo Batoni. The tomb of the Queen Mary I is on the right transept.