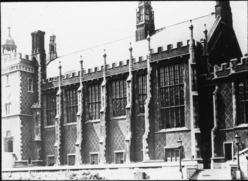 The Honourable Society of Lincoln’s Inn is one of four Inns of Court in London to which barristers of England and Wales belong and where they are called to the Bar. The other three are Middle Temple, Inner Temple and Gray’s Inn. The Old Hall dates from at least 1489, when it replaced the smaller “bishops hall”. The Old Hall is 71 feet long and 32 feet wide, although little remains of the original size and shape; it was significantly altered in 1625, 1652, 1706 and 1819. It was restored in 1924-1928. The Inn consists of three squares; Old Square, Old Buildings and Hardwicke buildings, first built in 1683, New Square, sometimes known as Serle Court, finished in about 1697, and Stone Buildings, partly built in 1780 by Robert Taylor and finished in 1845. The Tudor Revival Great Hall and library (1842-1845) is by Philip Hardwick.