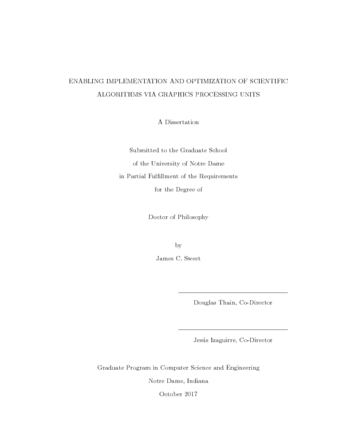 GPUs provide a fast but simplified architecture that leads to major challenges in implementation of algorithms. This document looks at how this can be applied to scientific problems that require both rigor and performance.

This work looks at solving three different problems by utilizing the GPU for visualization and computation. Firstly, it looks at exploring better methods of creating accurate and realistic 3D models from laser scan data and photographic images. Secondly, it explores the implementation of a coarse-grained molecular dynamics algorithm on the GPU and the how the factors of the simulation affect the performance and accuracy. Finally, it looks at transitioning part of an MPI particle laden flow simulation code to utilize the GPU as well as the challenges associated.

This work demonstrates that by implementing algorithms to utilize the power of the GPU provides an opportunity for providing scholars to be able to research more effectively and efficiently. Firstly, by using GPUs, effective on-site feedback can be provided for architects and archaeologists who are collecting data as well as off-site scholars attempting to explore this data after collection. Secondly, the performance of molecular dynamics simulations can be improved by $\approx6\ imes$ whilst keeping the accuracy, allowing for faster drug research and development. Finally, a particle laden simulation’s MPI particle update calculations can be migrated to the GPU to improve the performance by $\approx14\ imes$, allowing for more accurate exploration of areas such as pollution dispersion in the atmosphere.