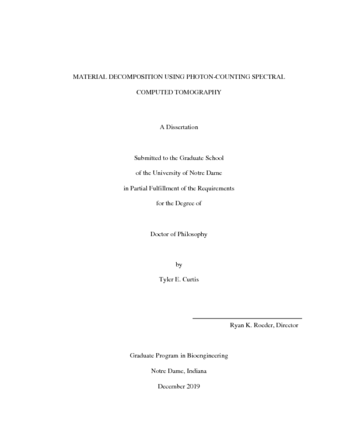 Clinical and preclinical X-ray computed tomography (CT) provides three-dimensional anatomic imaging at high spatial and temporal resolution. However, quantitative molecular imaging is not possible in conventional CT due to similarity in the overall X-ray attenuation across the polychromatic X‑ray photon energy spectrum and the use of energy integrating detectors. However, recent developments in photon-counting detectors have led to the development of prototype photon-counting spectral CT systems that can acquire images at multiple energy levels which, when used in conjunction with material decomposition algorithms, can identify and quantify contrast agent and tissue compositions. Thus, photon-counting spectral CT can provide simultaneous anatomic and quantitative molecular imaging. However, the development of these capabilities and their application remains nascent due to a limited availability of imaging systems. Therefore, the overall objective of this dissertation was to investigate quantitative material decomposition of multiple, discrete or spatially coincident, contrast agent and tissue compositions using a prototype preclinical photon-counting spectral CT system.