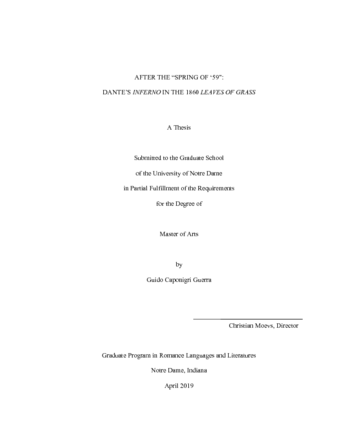 In this thesis, I will present evidence from the works of Walt Whitman to suggest he implemented his reading of Dante Alighieri’s Inferno seven years earlier than current scholarship believes and that he used explicitly Dantean words in Leaves of Grass. While American-Literature studies have noted that Whitman read, and greatly admired, Dante, they have, to this point, focused on later editions of Leaves of Grass; specifically, that of 1867 and the Drum-Taps sequence, inspired by the sights and horrors of the American Civil War, which Whitman served in as a nurse. Neglected is Dante’s presence in the earlier, 1860 edition of Leaves of Grass, which followed his initial, 1859 reading of the Inferno. Both implicitly and explicitly, Whitman used Dante’s own words to both enrich his poetry and cement his position as the great American bard.