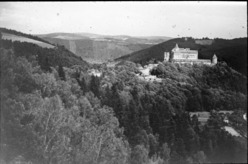 This was identified as “Pertstyn, Belgium” but I believe it is Pernstejn (which might have been considered Bohemia at the time).

A castle located on a rock above the village of Nedvědice and the rivers Svratka and Nedvědička, in the South Moravian Region, Czech Republic. Pernštejn came to be known as the marble castle because of the marble-like stone used to frame the doors and windows. It was founded by the Lords of Medlov probably between 1270-1285. Its history is closely connected to the Lords of Pernštejn (Pernštejnové) and their descendants. It has kept its appearance intact in the Gothic and Renaissance form as it was finished in the first half of the 16th century. Pernštejn is one of the best preserved castles in Czech Republic.