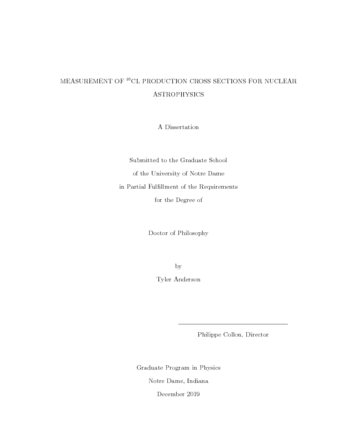 Isotopic studies of meteorites have provided ample evidence for the presence of short-lived radionuclides (SLRs) with half-lives of less than 100 Myr at the time of the formation of the solar system. The origins of all known SLRs is heavily debated and remains uncertain, but the plausible scenarios can be broadly separated into either local production or outside injection of stellar nucleosynthesis products. The SLR production models are limited in part by reliance on nuclear theory for modeling reactions that lack experimental measurements. Reducing uncertainty on critical reaction cross sections can both enable more precise predictions and provide constraints on physical processes and environments in the early solar system. This goal led to the start of a campaign for measuring production cross sections for the SLR 36Cl, where Bowers et al. found higher cross sections for the 33S(alpha,p)36Cl reaction than were predicted by Hauser-Feshbach based nuclear reaction codes TALYS and NON-SMOKER. This prompted re-measurement of the reaction at five new energies within the energy range originally studied, resulting in data slightly above but in agreement with TALYS. Following this, efforts began to measure cross sections for the next most significant reaction for 36Cl production, 34S(3He,p)36Cl. Activations were performed to produce 9 samples between 1.11 MeV/nucleon and 2.36 MeV/nucleon. These samples were subsequently measured with accelerator mass spectrometry at two labs. The resulting data suggest a sharper-than-expected rise in cross sections with energy, with peak cross sections up to 30% higher than predictions from TALYS.