Writing through Darkness: Doubt and Spiritual Life-Writing from Jonathan Edwards to Herman Melville 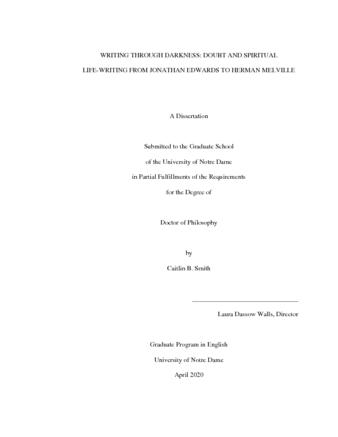 My dissertation examines doubt in American spiritual life-writing, from 1734-1876. During this time period, the American religious landscape pluralized, expanded, and splintered dramatically, in response to both intellectual transformations—new scientific and philosophical paradigms—and changing social issues, such as growing awareness of slavery’s abuses, North-South disunity among white-dominant denominations because of racism, the proliferation of new religious sects, and the rise of liberal Protestantism and early seeker-type spirituality. These changes are well-documented in previous religious scholarship, which also records the increasingly strident arguments about doubt and how to prevent it. However, previous scholarship faces a challenge. Though most religious and non-religious authors agree that doubt is on the rise, that it is bad for religion, and that is probably bad for national unity, they rarely use consistent definitions for “doubt.” My dissertation demonstrates how various American authors responded to this situation in which doubt was deeply stigmatized, universally suspected, but slippery and hard to define. The authors in my dissertation approach doubt not just as a religious or philosophical problem, but as a literary one, generating a range of different poetics and different ways of reading. By understanding how these authors sought to structure, contain, cultivate, or anticipate doubt, my project demonstrates how nineteenth-century Americans used experimental literary form for the work of writing their life stories and recognizing the stories of others.