Blue Mosque, Cairo: Mausoleum on the street side 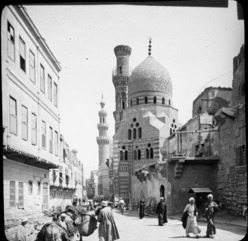 Part of the complex is a mausoleum located on the street side and containing the graves of Sultan ‘Ala’ al-Din Kuchuk (r. 1341-1342), son of al-Nasir Muhammad, and several of his brothers. This mausoleum, which predates the mosque, is one of the very few Cairene mausolea that follow the street alignment instead of the qibla.

One of several “blue” mosques in the world, named for blue Iznik tilework of the qibla wall (added later by Ibrahim Agha). The hypostyle mosque of Amir Aqsunqur was built by the amir, a son-in-law of al-Nasir Muhammad, in 1346-1347. In addition to cross-vaults on piers, the mosque has arcades on columns supporting a flat wooden ceiling, probably a later addition. Part of the foundation is a mausoleum located on the street side. The original minaret of Aqsunqur and the rectangular minaret of al-Ghuri are the only documented Cairene examples of four-story minarets.