Circus of Maxentius: West end, remains of one of the two remaining towers 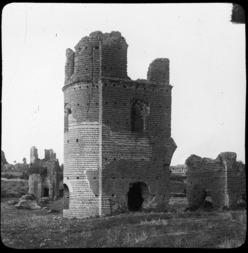 The Circus of Maxentius (known until the 19th century as the Circus of Caracalla) is part of a complex of buildings erected by that emperor on the Via Appia between AD 306-312. It is situated between the second and third miles of the Via Appia between the basilica and catacombs of San Sebastiano and the imposing late republican tomb of Caecilia Metella, which dominates the hill that rises immediately to the east of the complex. The Circus itself is the best preserved of all Roman circuses, and is second only in size to the Circus Maximus in Rome. The only games recorded at the circus were its inaugural ones and these are generally thought to have been funerary in character. They would have been held in honour of Maxentius’ son Valerius Romulus, who died in AD 309 at a very young age.