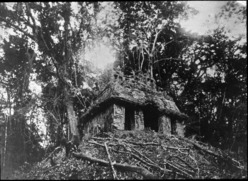 Site of Pre-Columbian Maya ceremonial centre in the foothills of the Sierra de Palenque mountains, Chiapas, Mexico. During the 7th and 8th centuries AD Palenque was the most important city on the far western periphery of the Maya world. Although the area was inhabited in the Late Pre-Classic period (c. 300 BC-c. AD 250), only a small group of people lived there. At the height of its importance, in the Late Classic period (c. AD 600-c. 900), however, at least 10,000 people lived there at one time. The site comprises a palace, a ballcourt and several temples sited in groups scattered over a large area.