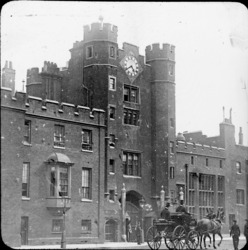 The gatehouse on the north side survives from the Tudor period, flanked by polygonal turrets with mock battlements, fitted with Georgian sash windows.

The palace was commissioned by Henry VIII, on the site of a former leper hospital dedicated to Saint James the Less. St. James’s Palace is one of London’s oldest palaces. It is situated in Pall Mall. Although no sovereign has resided there for almost two centuries, it has remained the official residence of the Sovereign and the Royal Court. Foreign ambassadors are still accredited to the Court of St. James’s. In 1809, much of the east and south ranges of the Palace was destroyed by fire, but the State rooms were restored by 1813.