Present Witness: The Confession of 1967 and the Travails of Presbyterians in American Society 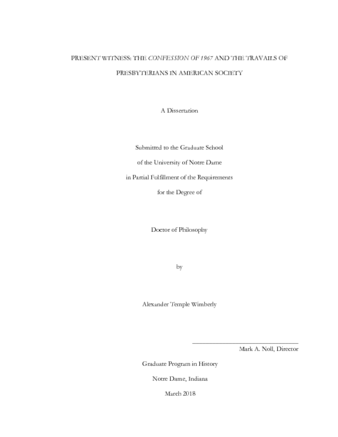 This dissertation evaluates the course of the United Presbyterian Church, one of America’s most historically significant religious institutions, through the mid-twentieth century by tracking a landmark expression of the denomination’s internal life. Crucial to this evaluation is explaining how that landmark, its Confession of 1967, sought to renew the church with fresh approaches to significant problems in American culture. With access to previously unprocessed materials and by following key denominational leaders like John Mackay, Edward Dowey, and Eugene Carson Blake, this study connects developments in the creation and reception of the Confession of 1967 with particular historic events. In doing so, it not only reveals how a denomination’s defining document could be influenced by the dominant culture, but also sheds light on a much broader issue: the loss in postwar America of a national consensus. “Present Witness” explains how a denomination, which once stood at the center of that consensus, sought to unite diverse parties in a shared mission.

Presbyterians, who viewed themselves as custodians of American culture, enjoyed considerable leverage in elite society. Their decision to redefine themselves with the motif of “reconciliation” represented a desire to regain social prominence with a theology that was relevant, authentic, and engaged. In pursuing its ministry of reconciliation, however, the church chose to focus on divisive social issues rather than on the more traditional evangelical emphasis on need for reconciliation with God. In so doing, denominational leaders risked splitting their church along lines that divided Americans more generally, rather than uniting it around a shared belief and common purpose.

The dissertation concludes that attitudes toward race and the church’s involvement in the civil rights movement realigned Presbyterians in ways previous studies have neglected. In particular, studying the Confession of 1967 shows why the denomination’s response to James Forman’s Black Manifesto and its support of Angela Davis’s legal defense fund crystallized divisions within and between Presbyterian denominations. The diminished role of mainline Presbyterians in America’s current public life owes much to the ways in which the church became polarized and paralyzed in the late 1960s and early 1970s.