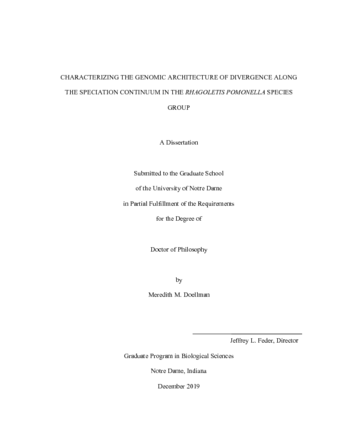 Darwin hypothesized that speciation creates a continuum of forms, as slight variation between races gradually accumulates by natural selection into distinct differences between species. However, recent theory suggests that the antagonism between divergent selection and gene flow can sometimes reach a tipping point, enabling rapid adaptive divergence and genomic differentiation. This shift from direct selection on individual genes to emergent processes operating at the level of the genome is difficult to examine empirically, because a single speciation event cannot be observed from beginning to end. Therefore, I consider a recent and ongoing radiation, the Rhagoletis pomonella species group (Diptera: Tephritidae), which displays a spectrum of divergence and gene flow among member taxa. This dissertation examines genome-wide divergence along this continuum from genic (host race) to genomic (species) phases of differentiation, providing an empirical test for theoretical models of divergence via genome-wide congealing (GWC). By leveraging the long history of ecological experiments in this system, as well as recent association studies for life history traits putatively under divergent selection, I was able to make and test specific GWC predictions. I found that, as expected, the signature of selection on life history traits (specifically eclosion timing) build up over the course of divergence from host race to species, across the early stages of the speciation continuum. Among the apple- and hawthorn-infesting R. pomonella host races, many loci associated with eclosion timing within the host races also showed elevated differentiation between the host races. However, genome-wide differentiation and linkage disequilibrium (LD) was still relatively low, suggesting that the effects of selection on these loci have not yet coupled genome-wide to dramatically reduce effective gene flow. Divergent selection on eclosion timing between R. pomonella and its later eclosing sister taxon, the flowering dogwood fly (FDF), has, it appears, begun to couple across the genome. “Selected” loci associated with eclosion timing showed greater differentiation between these two taxa than putatively “neutral” loci and also showed elevated pairwise LD between physically unlinked loci. Thus, despite an estimated magnitude of ongoing gene flow similar to that of host races, R. pomonella and the FDF remain genomically distinct both in sympatry and globally, suggesting a rapid transition across the GWC tipping point. Beyond this tipping point, it remains to be seen whether differentiation for and LD between loci associated with eclosion in R. pomonella (and putatively under selection during host shifts) are also elevated between R. pomonella and R. mendax, R. zephyria, and/or R. cornivora, and whether substantially reduced gene flow between these taxa has led to similar patterns among putatively “neutral” loci indicative of later stages of GWC. Evidence of a non-linear continuum of divergence in the R. pomonella species group could have broader implications for understanding the dynamics of primary divergence in the face of gene flow, maintenance of species boundaries upon secondary contact, and ultimately punctuated patterns of biodiversity in nature and the fossil record.