Cathedral of the Savior, Saragossa: Detail, Baroque facade and tower 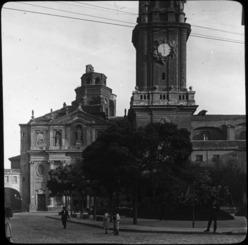 In 1118 Saragossa was conquered by Alfonso I of Aragon (reigned 1104-1134) and repopulated with Béarnais immigrants, while the Muslims were relocated in an extramural suburb. The old cathedral, La Seo (Aragonese for “the See”), was at one point a mosque. Reconstructed from 1119, most of the surviving fabric (restored) is 14th and 15th century. Pere Johan (died 1458) was brought from Barcelona to make the predella of the main altar in 1444, and Gabriel Joly worked on the retable (1520). The new tower, which was designed in Rome in 1683 by Juan Bautista Contini in the Baroque style, was started in 1686 and finished in 1704 with the placement of the spire. It shares co-cathedral status with El Pilar.