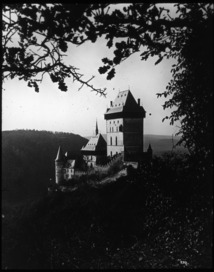 A large Gothic castle on a cliff above the River Berounka, founded 1348 by Charles IV, Holy Roman Emperor-elect and King of Bohemia. The castle served as a place for safekeeping the Imperial Regalia as well as the Bohemian/Czech coronation jewels, holy relics and other royal treasures. Its unique design was greatly influenced by the presence of the holy relics. It retains much of its important programme of painted decoration. The buildings of the inner castle (the palace, Church Tower and Great Tower) are built on three stepped terraces. On the lowest terrace stands the rectangular imperial palace. From the second floor a bridge leads to the first floor of the Church Tower on the second terrace. The crowning feature of the castle is the huge, rectangular, three-storey Great Tower on the highest terrace. A staircase on the south side leads to the second floor and the most sacred room in Karlštejn, the chapel of the Holy Cross, consecrated in 1365. It is a spacious rectangular chapel with two bays of rib vaulting. This chapel was ultimately dedicated to the Stigmata, and became the repository of the imperial crown jewels. Painting continued after construction was finished. In the 16th century the castle was renovated in a Renaissance style, to be restored to Gothic under the direction of Josef Mocker from 1887 to 1896.