St. Matthias' Abbey: Detail of lower half of facade of the abbey church with later Baroque additions 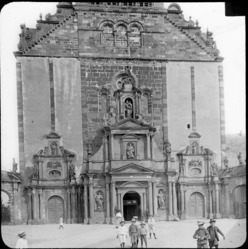 The abbey church is a Romanesque basilica. It is a renowned place of pilgrimage because of the tomb of Saint Matthias the Apostle (chosen to replace Judas Iscariot), after whom the abbey is named, located here since the 12th century, and the only burial of an apostle in Germany and north of the Alps. The abbey was originally named after Saint Eucharius, first Bishop of Trier, whose tomb is in the crypt. The church has been given the status of a basilica minor. A Baroque facade was added to the lower west front of the church. The monastery has been Benedictine since 977.