Orvieto Cathedral: Detail, lower half of facade with mosaics and rose window 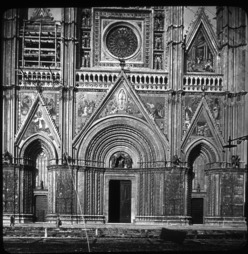 Mosaics and rose window are attributed to Orcagna, ca. 1359. The facade mosaics, put on from the second half of the 14th century, rapidly deteriorated and were extensively restored from the 17th century.