Origen and the History of Justification: The Legacy of Origen's Commentary on Romans 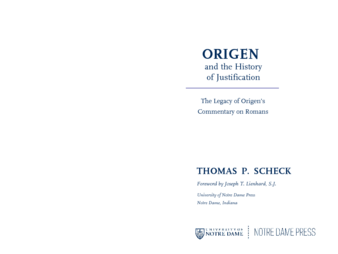 Standard accounts of the history of interpretation of Paul’s Letter to the Romans often begin with St. Augustine. As Thomas P. Scheck demonstrates, however, the Commentary on the Epistle to the Romans by Origen of Alexandria (185-254 CE) was a major work of Pauline exegesis which, by means of the Latin translation preserved in the West, had a significant influence on the Christian exegetical tradition. Scheck begins by exploring Origen’s views on justification and on the intimate connection of faith and post-baptismal good works as essential to justification. He traces the enormous influence Origen’s Commentary on Romans had on later theologians in the Latin West, including the ways in which theologians often appropriated Origen’s exegesis in their own work. Scheck analyzes in particular the reception of Origen by Pelagius, Augustine, William of St. Thierry, Erasmus, Cornelius Jansen, the Anglican Bishop Richard Montagu, and the Catholic lay apologist John Heigham, as well as Martin Luther, Philip Melanchthon, and other Protestant Reformers who harshly attacked Origen’s interpretation as fatally flawed. But as Scheck shows, theologians through the post-Reformation controversies of the sixteenth and seventeenth centuries studied and engaged Origen extensively, even if not always in agreement. An important work in patristics, biblical interpretation, and historical theology, Origen and the History of Justification establishes the formative role played by Origen’s Pauline exegesis, while also contributing to our understanding of the theological issues surrounding justification in the western Christian tradition.