Characterization of Plasminogen-Binding Group A Streptococcal M Proteins from the Aspects of Function, Structure, and Evolution 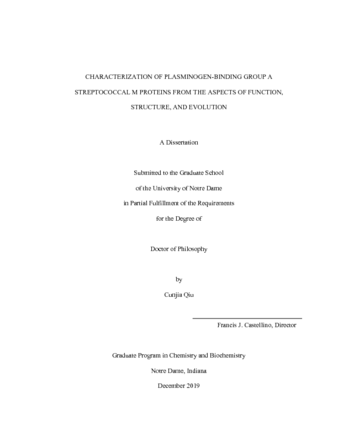 Group A streptococcus (GAS) is one of leading infectious causes of human morbidity and mortality. In particular, pattern D GAS isolates express plasminogen-binding group A streptococcal M protein (PAM) that utilizes its A-domain to specifically capture the K2 domain in human plasminogen (hPg). The binding to PAM facilitates activation of hPg by GAS-derived streptokinase on the cell surface. Plasmin generated degrades fibrin encapsulating bacterial cells, which is one of the major pathogenesis mechanisms employed by skin-tropic pattern D strains to escape the host immune defense.

Seven recombinant PAMs from different GAS strains were investigated in this work. Each PAM dimerizes in solution at 25 °C, wherein the C-domain constitutes the most important region in PAM dimerization. NMR solution structures of peptides that contain the A- and B-domains demonstrated that both domains are helix-destabilizing, and thus contribute little to dimerization. A structural model was accordingly developed to describe the non-ideal dimerization pattern of PAM. It is noteworthy that dimeric PAMs dissociate into unstructured monomers at 37 °C, to different extents. Although all PAMs tightly bind to hPg in a nM range at 25 °C, the reduction of α-helical content at 37 °C makes class II PAMs that only contain the a2-repeat interact with hPg ~1,000 times weaker, but impacts little to hPg-binding of class I/III PAMs containing complete a1a2-repeats. It is further corroborated that the a1-repeat protects the α-helix in the a2-repeat, making binding relevant residues in the latter repeat optimally orientate. However, this protection disappears when the a1-repeat is absent in class II PAMs. Another divergence among these PAMs is that dimeric class I/III PAMs completely dissociate once binding to excessive K2hPg at 25 °C, while monomeric and dimeric species coexist in the case of class II PAMs.

NMR structures of two complexes, AGL55NS88.2-K2hPg and KTI55SS1448-K2hPg, in which AGL55NS88.2 and KTI55SS1448 are truncated from the corresponding class II PAMs, elucidate the atom-level mechanisms underlying the differences in hPg-binding between class II and class I/III PAMs. On the basis of complex structures and the phylogeny of PAMs, the α-helical content in the A-domain is discovered to be a driving force in the PAM evolution.