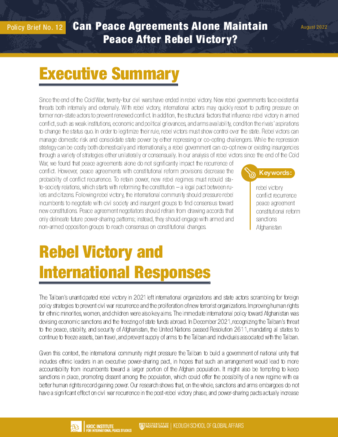 Since the end of the Cold War, twenty-four civil wars have ended in rebel victory. New rebel governments face existential threats both internally and externally. With rebel victory, international actors may quickly resort to putting pressure on former non-state actors to prevent renewed conflict. In addition, the structural factors that influence rebel victory in armed conflict, such as weak institutions, economic and political grievances, and arms availability, condition the rivals’ aspirations to change the status quo. In order to legitimize their rule, rebel victors must show control over the state. Rebel victors can manage domestic risk and consolidate state power by either repressing or co-opting challengers. While the repression strategy can be costly both domestically and internationally, a rebel government can co-opt new or existing insurgencies through a variety of strategies either unilaterally or consensually. In our analysis of rebel victors since the end of the Cold War, we found that peace agreements alone do not significantly impact the recurrence of conflict. However, peace agreements with constitutional reform provisions decrease the probability of conflict recurrence. To retain power, new rebel regimes must rebuild state-society relations, which starts with reforming the constitution – a legal pact between rulers and citizens. Following rebel victory, the international community should pressure rebel incumbents to negotiate with civil society and insurgent groups to find consensus toward new constitutions. Peace agreement negotiators should refrain from drawing accords that only delineate future power-sharing patterns; instead, they should engage with armed and non-armed opposition groups to reach consensus on constitutional changes.

This DOI is the best way to cite this brief.