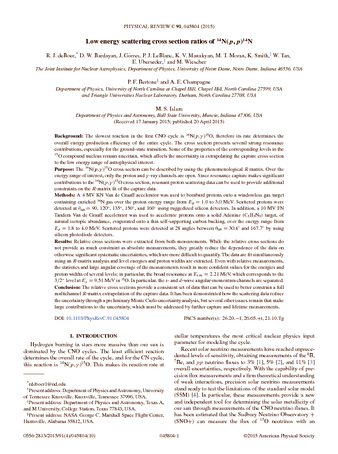 Background: The slowest reaction in the first CNO cycle is 14N(p,γ ) 15O, therefore its rate determines the overall energy production efficiency of the entire cycle. The cross section presents several strong resonance contributions, especially for the ground-state transition. Some of the properties of the corresponding levels in the 15O compound nucleus remain uncertain, which affects the uncertainty in extrapolating the capture cross section to the low energy range of astrophysical interest. Purpose: The 14N(p,γ ) 15O cross section can be described by using the phenomenological R matrix. Over the energy range of interest, only the proton and γ -ray channels are open. Since resonance capture makes significant contributions to the 14N(p,γ ) 15O cross section, resonant proton scattering data can be used to provide additional constraints on the R-matrix fit of the capture data. Methods: A 4 MV KN Van de Graaff accelerator was used to bombard protons onto a windowless gas target containing enriched 14N gas over the proton energy range from Ep = 1.0 to 3.0 MeV. Scattered protons were detected at θlab = 90, 120◦, 135◦, 150◦, and 160◦ using ruggedized silicon detectors. In addition, a 10 MV FN Tandem Van de Graaff accelerator was used to accelerate protons onto a solid Adenine (C5H5N5) target, of natural isotopic abundance, evaporated onto a thin self-supporting carbon backing, over the energy range from Ep = 1.8 to 4.0 MeV. Scattered protons were detected at 28 angles between θlab = 30.4◦ and 167.7◦ by using silicon photodiode detectors. Results: Relative cross sections were extracted from both measurements. While the relative cross sections do not provide as much constraint as absolute measurements, they greatly reduce the dependence of the data on otherwise significant systematic uncertainties, which are more difficult to quantify. The data are fit simultaneously using an R-matrix analysis and level energies and proton widths are extracted. Even with relative measurements, the statistics and large angular coverage of the measurements result in more confident values for the energies and proton widths of several levels; in particular, the broad resonance at Ec.m. = 2.21 MeV, which corresponds to the 3/2+ level at Ex = 9.51 MeV in 15O. In particular, the s- and d-wave angular-momentum channels are separated. Conclusion: The relative cross sections provide a consistent set of data that can be used to better constrain a full multichannel R-matrix extrapolation of the capture data. It has been demonstrated how the scattering data reduce the uncertainty through a preliminary Monte Carlo uncertainty analysis, but several other issues remain that make large contributions to the uncertainty, which must be addressed by further capture and lifetime measurements.