Palazzo della Cancelleria: Courtyard with the original columns from the Theatre of Pompey 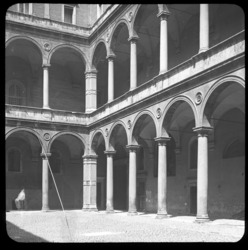 Built ca. 1485-ca. 1511 as the palace of Cardinal Raffaele Riario. The palace is one of the most important and influential examples of 15th-century Roman architecture, but no documentation identifies its architects. Suggestions have included Baccio Pontelli, Antonio da Sangallo (i), Francesco di Giorgio Martini and Andrea Bregno. Vasari attributed a share in it to Bramante, but Bramante did not arrive in Rome until 1499 and could not have been the original architect; some scholars see his influence in the courtyard. The large portal, designed by Domenico Fontana was added in 1589. The ground floor of the side flank incorporates shops; the Cancelleria was the first Renaissance palace to revive this ancient Roman tradition. The simple and harmonious courtyard features superimposed open loggias and a closed second storey decorated with pilasters. It is said that the 44 granite columns were taken from the Theatre of Pompey (dedicated 55 BCE) and that stones from the Colosseum were used for general building purposes.