Temple Church: View of the Round Church where it adjoins the Chancel 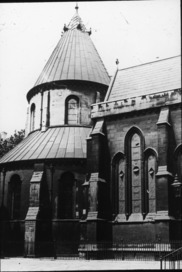 The conical roofs are later additions (ca. 1841), destroyed in WWII. The building was restored back to the earlier Gothic phase with the top turret with crenellations.