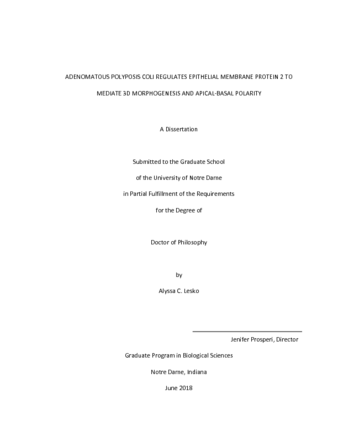 Adenomatous Polyposis Coli (APC) is lost in several epithelial cancers and regulates a variety of normal biological functions including cell migration and apical-basal polarity. Loss of apical-basal polarity disrupts several cellular processes including epithelial structure and intracellular signaling, and is an early marker for tumorigenesis. We previously demonstrated that APC knockdown (APCKD) in Madin-Darby Canine Kidney (MDCK) cells altered cyst size and inverted polarity in 3D culture. Through microarray analysis we made the novel observation that APC loss increased Epithelial Membrane Protein 2 (EMP2) expression. Here we discovered that EMP2 knockdown in APCKD cells decreased cyst size and restored apical polarity. These studies are the first to identify EMP2 as a regulator of apical-basal polarity though the mechanisms downstream of APC and EMP2 and the regulation of EMP2 by APC are not yet fully understood. With these studies we determined that APC and EMP2 do not control β1 integrin/FAK/Src, Cav1/ERK/JNK, and Scrib/Hippo signaling suggesting a novel downstream mechanism by which APC and EMP2 regulate cyst size and polarity. We identified filamin A or plectin isoform X2, histone H3.3, histone H2A type 1-E-like, and 3-hydroxyacyl-CoA dehydrogenase type-2 as possible candidates of APC/EMP2-mediated polarity. Additionally, we investigated transcriptional regulation of EMP2 by APC. In parallel studies we identified transcription factors that are predicted to bind the EMP2 promoter and transcription factors that are regulated by APC. Together these data suggested STAT-1 and STAT-3 as potential APC-mediated transcriptional regulators of EMP2. Overall, these studies identified a novel role for EMP2 in controlling apical-basal polarity and have begun to elucidate the molecular mechanisms by which EMP2 influences APC-mutant tumorigenesis. Gaining a better understanding of how APC and EMP2 interact to regulate normal cellular functions will elucidate the mechanisms by which APC and EMP2 contribute to tumorigenesis and identify novel therapies for APC-mutant cancers.