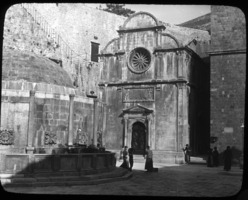 The structure in front is the larger fountain built by Onofrio di Giordano della Cava (fl. 1438-1455). Built in 1438, the fountain is part of an elaborate water supply system. The 16-sided domed reservoir was built in honor of the new water works, a 7-mile aqueduct system from mountain streams to the city fountains.

The small votive church of St Saviour (1520; damaged 1991-) was built by Petar Andrijić (fl 1492-1553) [Petar Andrijich of Korchula] in a mixture of Gothic and Renaissance elements derived from Lombardy. As stated on the monumental inscription above the main entrance, the church was built by the order of the local Senate in gratitude that the town had been spared from destruction in an earthquake (one of many in an earthquake zone). The church has one nave with a Gothic-cross-ribbed vault. The lateral windows are also Gothic with the typical pointed arches. Nevertheless, the main facade with the Renaissance elements on the portal and the three-leaf semicircular top as well as the semicircular apse reveal a recognizable Renaissance style.