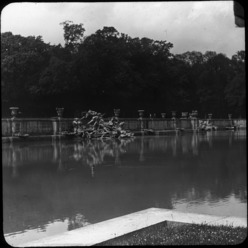 In 1661, when Louis XIV began to enlarge the château of Versailles, the surrounding grounds were in a rudimentary state. The King acquired further land (at the end of his reign the estate extended over 2473 ha, now reduced to 815 ha) and had gardens designed and laid out by André Le Nôtre which would harmonize with Le Vau’s new building. Louis paid the greatest attention to the design of the gardens, visiting them daily whenever at Versailles. The grounds still retain the general structure of Le Nôtre’s layout: a principal east-west axis flanked by parallel secondary axes north and south, and intersected by four north-south avenues. In the grid squares thus defined, Le Nôtre, succeeded by Jules Hardouin Mansart, installed groves (bosquets) and fountains. The east-west axis ran from the terrace of the château via the Parterre d'Eau, with the bronze allegorical statues of the rivers of France, the Latone steps, the Parterre de Latone and the Tapis Vert walk, to the Bassin du Char d'Apollon at the beginning of the 1560 m Grand Canal (1667-1690). On the south side, the gardens terminated with the Pièce d'Eau des Suisses (1679-1684), which extended the Parterre de l'Orangerie towards the château, and the Orangery built 1684-1686 by Hardouin Mansart under the Parterre du Midi.