'The Magnificent and Progressive Destiny' of Unified Italy: History and Sicily in Il Gattopardo 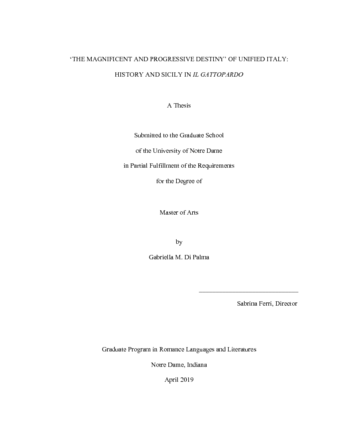 The political unification of Italy between 1861 and 1871 brought to the fore several issues regarding the formation of a new Italian identity. The cultural and historical diversity of Italy’s regions rendered difficult the establishment of a shared sense of identity and the Southern regions came to be perceived as the internal “other.” Giuseppe Tomasi di Lampedusa’s Il Gattopardo (1957) set in Sicily between 1860 and 1910, describes the crucial years of the Risorgimento and its aftermath up until the period preceding World War I. The novel depicts a society rooted in tradition, but also suspended in time and skeptical towards historical progress.In particular, the aristocratic figure of Don Fabrizio embodies a pessimistic view of history, as well as of society and politics. Such an attitude towards progress might remind us of Giacomo Leopardi’s skepticism vis-à-vis any optimistic theory of historical progress. By exploring the themes of pessimism, decadence, and history in Il Gattopardo, we can better understand not only the so-called “otherness” of Southern Italy, but also the origins of the “Southern Question.”