Small Molecules That Synergize with Colistin 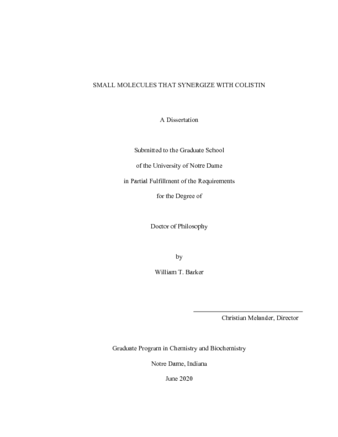 Antibiotic resistant bacteria pose an existential threat to the modern healthcare system. The degree and severity of antibiotic resistance that is clinically observed continually rises while the development of novel antibiotic classes remains stagnate. Antibiotic adjuvant methodology can be utilized to circumvent the arduous process of novel antibiotic development by pairing non-antimicrobial small molecules with clinically available antibiotics to defeat bacterial resistance or potentiate a drug of interest. This work comprises efforts to identify a diverse cohort of chemical scaffolds that can be employed in advantageous combinations with colistin, a polymyxin antibiotic, to defeat colistin resistance and offset its detrimental side effects. This work discloses numerous molecules with unprecedented activity through a comprehensive screening of an in-house library of nitrogen-rich small molecules and high content drug repurposing efforts using commercially available chemical libraries with known eukaryotic activity. Before the discovery of the mobile colistin resistance-1 (mcr-1) gene in 2015, spontaneous colistin resistance was found only in environments with intense selection pressure. Since that time, multiple mcr plasmid-borne genes have been detected in clinical isolates all around the globe. As such, screening efforts were aimed at reversing colistin resistance controlled by mcr genes and all other known genetic mechanisms. Active scaffolds were then subjected to structure-activity relationship (SAR) studies in efforts to optimize activity and minimize off-target effects. Specifically, SAR studies using derivatives of meridianin D, a marine natural product, identified molecules with significant colistin adjuvant activity in Gram-negative species while simultaneously controlling biofilm formation in Gram-positive strains. Additionally, SAR studies of a tryptamine-based molecule inspired by the natural product oroidin accessed molecules with increased colistin synergy and decreased off-target effects. Two novel colistin adjuvants were then discovered from a high content screening of three commercially available eukaryotic kinase inhibitor libraries. These molecules remain some of the most potent and highly versatile adjuvants as of the writing of this work. This same methodology was successfully applied using eukaryotic phosphatase inhibitor libraries in a study that yielded two natural products with colistin synergy. A 59-member chemical library comprised of analogues of IMD 0354, first identified in the kinase inhibitor repurposing study, was then used to probe for additional bacterial activity and determine if this structure can be honed to diminish its eukaryotic effects. This study describes the potent antimicrobial activity of these molecules in drug resistant Gram-positive species and establishes that eukaryotic activity can be mitigated while maintaining bacterial activity. Throughout all of these studies, multiple methods are applied to examine the underlying mechanism of action and potential pharmaceutical liabilities of bioactive compounds. Lipid A mass spectrometry was utilized to detect changes in the colistin resistant phenotype, while quantitative PCR (qPCR) revealed significant changes in the expression of genes involved in resistance pathways. The eukaryotic toxicity of each active structure co-dosed with colistin was determined in tissue culture to preempt a potentially toxic combination. In all, the studies that comprise this work are aimed towards the development of viable drug candidates that can become a powerful new tool within the clinical arsenal to combat the continual rise of multi-drug resistant bacteria.