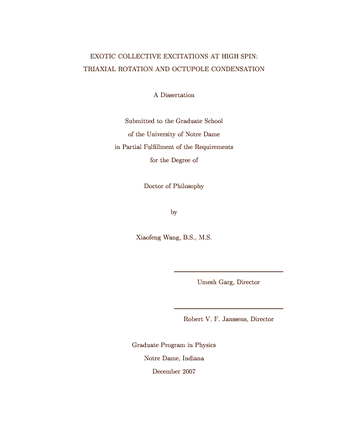 In this thesis work, two topics, triaxiality and reflection asymmetry, have been discussed. Band structures in 163Tm were studied in a “thin” target experiment as well as in a DSAM lifetime measurement. Two new excited bands were shown to be characterized by a deformation larger than that of the yrast sequence. These structures have been interpreted as Triaxial Strongly Deformed bands associated with particle-hole excitations, rather than with wobbling. Moreover, the Tilted-Axis Cranking calculations provide a natural explanation for the presence of wobbling bands in the Lu isotopes and their absence in the neighboring Tm, Hf and Ta nuclei. A series of so-called “unsafe” Coulomb excitation experiments as well as one-neutron transfer measurements was carried out to investigate the role of octupole correlations in the 238,240,242Pu isotopes. Some striking differences exist between the level scheme and deexcitation patterns seen in 240Pu, and to a lesser extent in 238Pu, and those observed in 242Pu and in many other actinide nuclei such as 232Th and 238U, for example. The differences can be linked to the strength of octupole correlations, which are strongest in 240Pu. Further, all the data find a natural explanation within the recently proposed theoretical framework of octupole condensation.