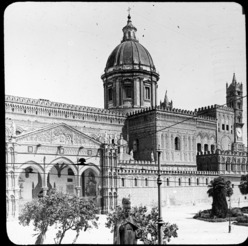 Side of cathedral with south porch to the left, apse and dome in center, and towers visible to the right. This external wall is largely 12th century except for the dome (18th century) and porch (added 1453).

Palermo Cathedral fuses the Latin basilican plan with the centralized Byzantine one. The four corner towers were completed in the 14th century, and the portal of the west façade is dated 1352-1353. In 1426 Antonio Gambara constructed the south portal, with wooden doors (1432) carved by Francesco Miranda. This is framed by the great south porch in the Catalan-Gothic style (1453); the column on the left bears an inscription from the Koran and is probably preserved from the earlier mosque. Between 1781 and 1802 the interior was remade by Ferdinando Fuga.