Basilica-Cathedral of Our Lady of the Pillar, Saragossa: Distant overall view 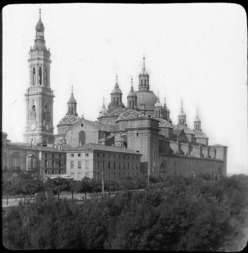 A chapel dedicated to Mary had existed since the early Christian era. By the time of the Aragonese conquest the shrine of the Virgin of the Pillar was an important magnet for pilgrims Indulgences for the embellishment of the shrine were sold as far afield as Germany and Greece in 1297, and most Aragonese monarchs until Philip II of Spain (1556-1598) made bequests. Damián Forment made the main retable (from 1509). The particular devotion of Charles II (reigned 1665-1700) to Nuestra Señora del Pilar led to its reconstruction on an even vaster scale from 1681. It is co-cathedral along with La Seo.