The Looking-Glass and Beyond: Using Observations and Modeling of Stellar Actinide Abundances as a Window into r-Process Events 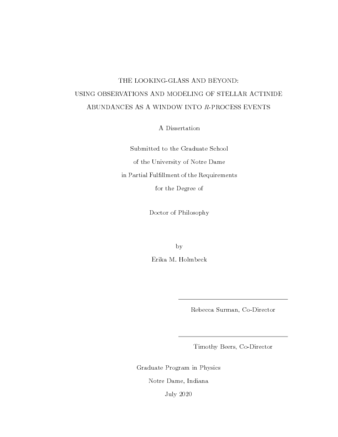 Nucleosynthesis by rapid neutron capture—the r-process—accounts for the production of roughly half of the heavy elements in the Solar System. Not only are these heavy elements found locally, but they are also found in very old, chemically simple stars, providing evidence that this process must occur astrophysically. Yet the exact environment that made the heavy elements is unknown. Through the combination of r-process network calculations and observational signatures of r-process events, I utilize actinide production by the r-process to investigate questions regarding the source of heavy-element abundance variations in metal-poor stars, the effect of fission cycling on the r-process abundance pattern, limits on r-process ejecta by candidate sites, and constraints on primordial neutron star binary systems. I find that neutron star mergers have the potential to synthesize all observed levels of actinide abundances measured in metal-poor stars if astrophysical variations on the composition of the ejecta are allowed within the merger site. Using this principle, I then determine that if neutron star mergers produced the majority of r-process elements in the Galaxy, then the first mergers were primarily mass-asymmetric. This thesis demonstrates a unique and adaptable route by which the elemental signatures of metal-poor stars can disentangle the complex chemical-enrichment history of the Universe.