Religion, Revolution, and the Realm of the Literary in Twentieth-Century Central American Prose 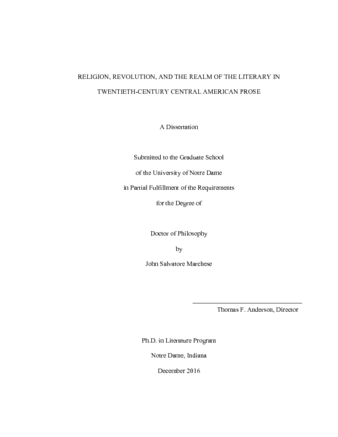 Religion, Revolution, and the Realm of the Literary in Twentieth-Century Central American Prose is a study of twentieth-century fictional and nonfictional works written in and about El Salvador, Guatemala, Mexico, and Nicaragua, emphasizing the relationship between church and state during times of revolutionary conflict. Past scholarship on many of these works has tended to examine them primarily in the context of indigenous, pre-Columbian influences and has paid relatively little attention to the overwhelmingly Catholic context of their production. This study, in contrast, engages the ecclesiastical content of such texts alongside indigenous themes to make possible a more complete and more nuanced reading. A key aspect of the argument is that these works deploy liturgical language to disrupt the discourse of a state that tries to dominate and control human subjectivity and, more specifically, that the Eucharist serves to articulate social mobilization through language that unites the discrete parts of a social body against domination by hegemonic forces. Accordingly, a grammar of the Eucharist is elaborated to facilitate a reading of the church’s historical relationship with both reactionary and revolutionary elements as represented in works by authors including Miguel Ángel Asturias, Rosario Castellanos, Manlío Argueta, Óscar Romero, and Ernesto Cardenal. The theoretical points of departure include twentieth-century sources ranging from theologians such as William T. Cavanaugh, Gustavo Gutiérrez, Herbert McCabe, and Johann Baptist Metz to philosophers such as Giorgio Agamben and Louis Althusser. In line with the study’s transnational approach, the historical particularities of each of the four countries are explored in detail, and the inclusion of nonfictional texts demonstrates that the social mobilization articulated through the Eucharist is not merely metaphorical or symbolic, since the liturgy has sometimes served as a site of actual historical resistance to violent oppression.