Temple Church: Interior view of the rectangular nave of the Chancel 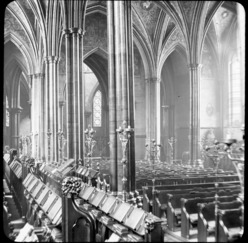