Roman Theater of Orange: Raking view of the stage wall with alcoves and part of the seating 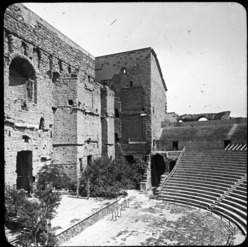 Situated in the Rhone valley, the ancient theatre of Orange, with its 103-m-long facade, is one of the best preserved of all the great Roman theatres, built early in the 1st Century CE. It is owned by the municipality of Orange and is the home of the summer opera festival, the Chorégies d'Orange. It is one of the best preserved of all the Roman theatres in the Roman colony of Arausio (or, more specifically, Colonia Julia Firma Secundanorum Arausio: “the Julian colony of Arausio established by the soldiers of the second legion”) which was founded in 40 BCE. In 1981 UNESCO declared the theatre to be a World Heritage site.