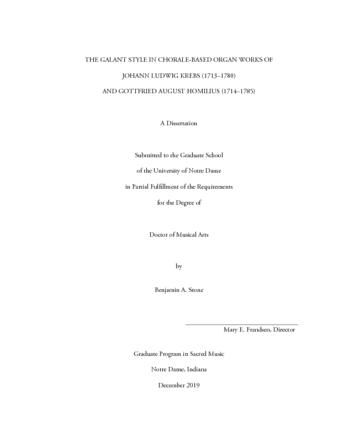 Johann Ludwig Krebs (1713–1780) and Gottfried August Homilius (1714–1785) were both significant composers of organ music in the middle of the eighteenth century. Their careers paralleled each other, and their chorale-based organ works are among the most important in the genre after the generation of Johann Sebastian Bach (1685–1750). During their lifetimes, the new galant style of composition gained prominance, and they incorporated the new style into their compositions, including the organ chorales. This study situates these two composers in their time and place by examining their biographies. It then engages with the lineage of the term “galant” and how it came to be a unique style of music, bridging what later came to be known as the Baroque and Classical periods. In particular, this study builds on the pioneering work of Robert Gjerdingen, who identified musical schemata, ingrained musical behaviors reflective of mid-eighteenth century courtly culture, as hallmarks of the galant style. However, in his study, Gjerdingen never addresses Lutheran sacred music or organ music at all, a fact which he acknowledges. This study builds upon Gjerdingen’s work by expanding his concepts to the genre of chorale-based works for solo organ. While the galant style was the new, progressive music of the mid-eighteenth century, church music was often quite conservative, and the chorale melodies themselves present clear melodic, harmonic, and rhythmic constraints on composers who set them. By analyzing organ chorales of Krebs and Homilius through the lens of Gjerdingen’s schemata, this study shows how the galant style operates in these works, even among the constraints imposed by preexisting chorale melodies.