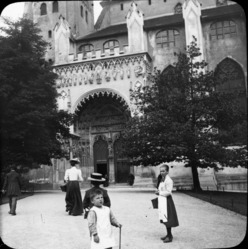 These portals mark the original course of the Reichsstrasse and are akin to city gates. Both of them, the south portal in particular, were seen by the citizens as the attributes of the bishop and the city, and viewed as proof of their right of way through the cathedral. The south portal facing the town is more elaborate. (Grove)

Under Bishop Henry II (reigned 1047-1063), a Romanesque aisled basilica (consecrated 1065) with a double choir, western transept, crypt and side towers (completed later) evolved. The Romanesque bronze door of the south aisle portal dates from around the time of consecration or later (since 2002 protected in Augsburg’s Diocesan Museum. Gothic alterations were carried out from 1326, including the vaulting of the west choir, transept and nave (1331-1339), the addition of two extra aisles and the construction of the eastern hall choir (designed 1343; consecrated 1431) with an ambulatory and radiating chapels. The south portal, understood to have been underway only from 1356, suggests the style of the Parler family. Both portals of the eastern choir have a programme based on the life of the Virgin and thereby make reference to the dedication of the cathedral. The arms of burghers under the statues of the south portal are prominent, again ensuring that the citizens’ claim on the cathedral was unmistakably stated.