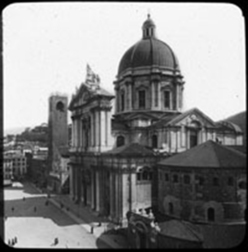 The New Cathedral is the largest Roman Catholic church in Brescia, Italy. Construction was begun in 1604. The original commission was given to Andrea Palladio, but the commission was then granted to Giovanni Battista Lantana. Work continued sporadically but was finally completed in 1825. The present dome was rebuilt after destruction in World War II. Its architectural style is characterized as Italian Baroque, with Baroque elements in the lower portion of the facade and Neoclassical elements in the upper portions..