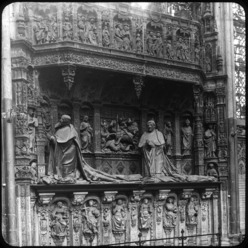 Marble and alabaster tomb in the choir of Rouen Cathedral, which depicted the deceased kneeling. Completed in 1523, it was transformed in 1525 to serve as a cenotaph for Georges II as well. The monument is profusely carved and includes Virtues, Saints, Apostles, a prominent relief of St George and the Dragon, and others with Italianate candelabra, swags and grotesques. Roulland Le Roux was overseer, assisted by the sculptors João de Ruão, who began the weepers, Mathieu Laignel (fl 1513-25), Regnault Thérouyn, André le Flament (fl 1520-21) and Pierre des Aubeaux (fl 1500-25). The last executed the statues of Georges I and Georges II (recut, by 1542, by one ‘Jean Goujon’). The tomb is the most complex funerary monument in the early Renaissance style in France.