Shwedagon Stupa: One of the pavilions of the four cardinal points, flanked by lions with human faces 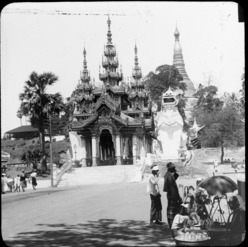 According to legend, it was built to enshrine eight hairs from the head of the Buddha. Its documented history begins in the 14th century with Binnya U (reigned 1353-1385), ruler of the Mon kingdom of Pegu, who raised the stupa to a height of 22 m; his granddaughter, Queen Shin Sawbu (reigned 1453-1472), built and enlarged the square platform, raised the stupa again and gilded it. In the 17th and 18th centuries it was damaged by earthquakes several times and repaired. In 1774 the Konbaung king Hsinbyushin (reigned 1763-1776) put up a new hti (“umbrella”), thus raising the monument to its present height of 99.4 m. The stupa is surrounded by numerous other structures and sculptures.