Temple Church: Interior, nave of the Round Church with effigy tombs 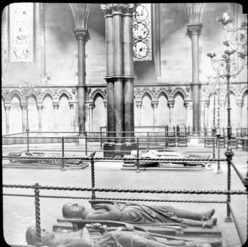 The original columns of dark Purbeck marble, seen here, were replaced with replicas after damage in WWII. There are 9 marble effigy tombs of medieval knights in the nave.