To Help or Not to Help: Does Family Racial Configuration Matter? 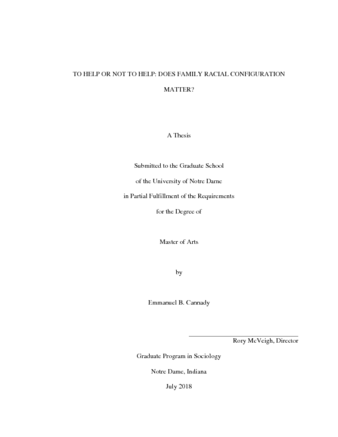 Where most research on racial discrimination focuses on harm, this paper focuses on the process of withholding help.I, therefore, ask the research question: does variation in whether someone will intervene on behalf of a child depend on the child’s family racial configuration?I answer this question using experimental vignettes by randomly assigning Amazon MTurk users into five groups, representing one of five black and white family racial configurations.I find that people would directly intervene on behalf of a child victim with a black father and white mother significantly less than a comparable child with two white parents.I also find having a black father reduced the likelihood a participant would intervene on behalf of the child.Lastly, the children’s and mothers’ race show no significant difference in intervention.I end with a discussion proposing a racial hierarchy that considers the intersection of race, gender, and family racial configuration.