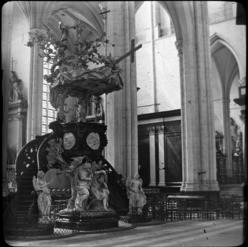 The abbey of St Bavo was founded in the 7th century AD outside the walls, and it was destroyed in 1540 when Charles V built the new citadel (later destroyed). In 1539 the chapter had been moved to the parish church of St Jan, which was rededicated to St Bavo. A chapel dedicated to St Jan (St. John) is documented in the 10th century, and of its Romanesque successor (1038) part of the crypt, which extended under the choir, survives. In 1550 the Emperor granted a considerable sum for the completion of the building, which was finished nine years later, achieving Cathedral status in 1559. The choir was vaulted in 1628.