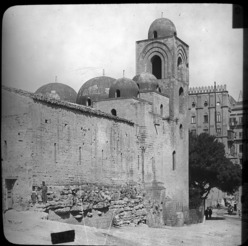 Construction of this church began after the death of St. William of Monte Vergine (1085-1142) and was entrusted to his disciples, known as the Eremiti (hermits) of Montevergine. It was completed by the end of 1148, when it was turned over to the Eremiti by Roger II with a charter stating that it was built at his expense. The exact date of construction is complicated by the presumed existence on the same site of a Roman temple, a Byzantine building, which was perhaps the Gregorian monastery of S Ermete, and a mosque, on the remains of which the south side of the church was probably built. The characteristic hemispherical domes, best viewed from the outside, are derived from the Arab heritage; the central plan and the T-shaped cross plan come from the Middle Byzantine and Latin traditions respectively.