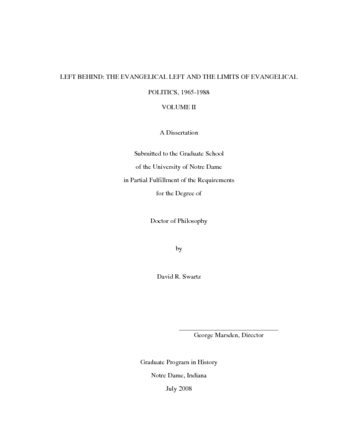 This dissertation examines the evangelical left movement in the United States during the postwar period. Non-conservative sectors of evangelicalism, vibrant in the nineteenth century but in eclipse following the fundamentalist-modernist controversies of the early twentieth century, again emerged in the 1960s and 1970s. Politically moderate to leftist and theologically conservative, this evangelical left encompassed diverse groups such as the Post-American/Sojourners intentional community, InterVarsity Christian Fellowship, Evangelicals for Social Action, and the Association for Public Justice.

This small but vibrant movement points to a broader, more differentiated evangelicalism obscured by the prominence of the religious right. Evangelical boundaries for instance proved to be surprisingly permeable in failing to shield many young evangelicals from “the world.” Powerful cultural and political forces shaped the evangelical left, which traveled a parallel journey with its secular counterpart through the civil rights movement, antiwar protests, New Left politics, and identity politics. As the evangelical left peaked in the mid-1970s, it became clear that “the sixties” had produced a similarly wrenching, if a bit lagged, effect on evangelicalism as it had on non-religious cultural institutions. Though the movement languished under the weight of identity politics and the dilemmas of abortion, it persisted into the 1980s as a key component of the postwar politicization of evangelicalism. Its contentious tactics, absolutist rhetoric, and public engagement of structural politics with spiritual commitments in fact anticipated the political style of the religious right.

In seeking to broaden the traditionally narrow scope of evangelicalism, this dissertation additionally explores the struggle for identity among diverse evangelicals. Despite attempts by architects of the new evangelicalism to create the illusion of a single evangelical identity in the 1950s and 1960s, the movement remained politically, theologically, and culturally diverse. Evangelicalism’s decentralized ecclesiastical structures; recurrent strains of apoliticism; ill-fit to the American two-party system; and racial, gender, theological, and political diversities belie its reputation as a unified political bloc.